As normal for this type of z-personality it took forever to get on the road but eventually my left arm was slathered in sunscreen , suitcase in the trunk, cooler in the backseat and my fav driving tunes queued up and I was on my way. I-10 is incredibly boring for anyone that has driven it more than once so my primary explorations for this portion of the ride was into the nooks &crannies of my mind…. when was the last time I went to Picacho peak (20 yrs ago – awk) … what might be the objects in the road that the sign is warning about (never saw a thing) … what exactly is that emblem on the TEFSUA bus up ahead ( deer head dancer).
The scenery improved once west of Phoenix – mainly because its not as familiar but it was still I-10 so I was back to my imagination but there was little to entertain until I was about 40 miles west of Phoenix and traversed an underpass claiming it was 411 Avenue! In the middle of the desert! I finally decided that if you had one avenue every tenth of a mile then that would be 411 avenue west of Phoenix …. I am so glad I took so many college math classes…. no doubt number theory should receive credit for my efforts. I could include more of my brains meanderings but I think enough is enough …until finally….
Off of the freeway at last and down to state roads. They are only 2 lanes wide but much more interesting. These were AZ state roads but wandered through small towns that barely look like they have changed since the forties and fifties. For a while I was parallel to a railroad and when it passed over gullies I could see that there wood trestles…. wood! Of course that took my brain off to old movies of the first interconti etal railroad and brawny men swinging hammers to drive the spikes in and more mental perambulations.
At last I swung north on AZ95 in Parker ( home of Parker dam on the CO river ) and more rv’s than I ever hope to see again. Mile upon mile of rvs along the rivers edge. Along that stretch I finally ran into the bane of all road trip afficiandos … road construction! This can be fortuitous if there is a side road offering rural exploration but not so in this case …. the only side roads as I inched along were more rv parks.
I am going to save discussion of Lake Havasu for my next post but will at least add one photo taken just before I entered the town. 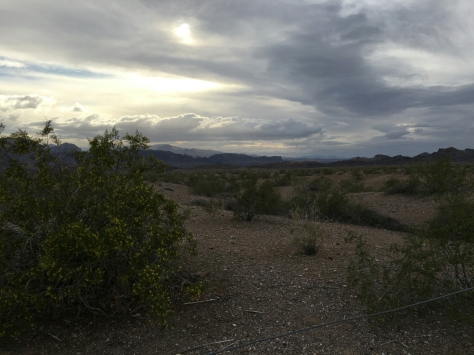