The day is all about water. Water, water everywhere…

I woke in Port Angeles which is located on the Strait of Juan de Fuca. See previous blog post for picture. It was just as picturesque in the am but its time for me to be off. Headed for Olympic National Forest, west of Port Angeles on the scenic US Rte 101.

The road took me back into the beautiful forests of the Pacific NW. It wasn’t long before the winding road took me along the shores of Lake Crescent. The lake goes on and on and is beautiful from every angle.

Lake, trees, mountain and sky! Who wouldn’t be moved by a site like this? Gorgeous. Maybe add in a bit of low hanging clouds? 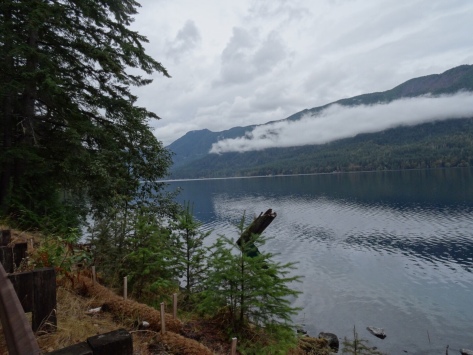 The drive continued along the lake for quite a bit until we reached the end of it and then it was just more beautiful forest, Olympic National Forest. As I drove along it begin to start getting misty and looking like rain. About this time I reached the town of Forks, WA. I pulled into the visitor information area just as it started to pour. So does the town name of Forks mean anything to you? Well its known first and foremost for having an average annual rainfall of 10 feet!! 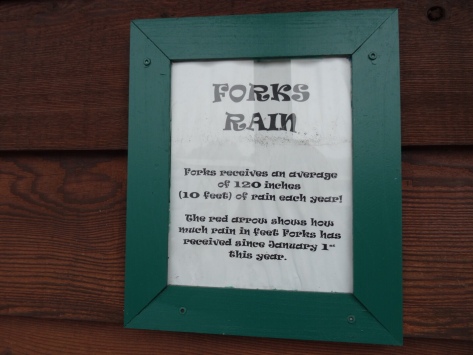 Due to the pouring rain I didn’t get a picture of the rain gauge but it showed 2017 as well above average and this year showing below average – but there are 3 months to go.

So Forks has another claim to fame that will probably one day fade into obscurity unlike the rainfall. Vampires! Stephanie Meyers Twilight series of movies were filmed here.

Of course the movie filming probably boosted tourism a great deal more than the annual rainfall does. 🙂

I read the books but never saw the movies so all of the paraphernalia in the gift shop didn’t hold my attention so I braved the pouring rain and headed back out on the road.

Obviously it is something about that specific area as it was not long before I was out of the rain again. Must be fascinating to meteorologists. After a bit the road turned further south and began to parallel the Pacific Ocean shoreline. I was in the HOH reservation and the HOH Rain Forest. I began to see signs for beaches so turned off on “Beach 4”. I took the short overlook trail at first and was well rewarded with the view. 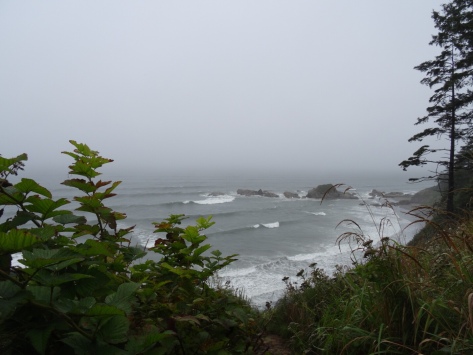 Wanting to get closer I took the trail that headed down to the short. I didn’t make it all the way to the water as the trail ended up on top of some rocks and since it was wet and I didn’t want to risk another broken ankle, decided to take my pics from the top of the rocks.

You’ll have to use your imagination here to see the seal playing in the waves. He seemed to submerge every time I clicked the shutter. Close your eyes and I’m sure you will see him.

The rainforest was just as intriguing as the ocean so I did get some shots of that as well.

I’m pretty sure that whoever said moss grows on the North side of a tree had never been in a rainforest – the trees are coated on all sides with moss! This next pic was just pretty neat. A tree growing on a downed tree. Circle of life – plant wise.

By this time I was starving and the closest town of any size was another hour away. So time to boogie.

I arrived in Aberdeen and Yelp directed me to the Tap Room. Just my kind of place.

I had the “British Eyes Only IPA” and the flat bread pizza. Yum.

My reservation for the night was in Olympia. In spite of the good company I didn’t linger but got back on the road. Not much to say for the rest of the drive. I was out of the forest and in fairly normal town to town traffic.

I had gotten a good last minute deal at the Hilton downtown and got there without mishap. They have a bar but no restaurant but there was a good one right across the street. So I indulged in a margarita and lamb chops. I wrapped up the day with my book on the couch in my room.