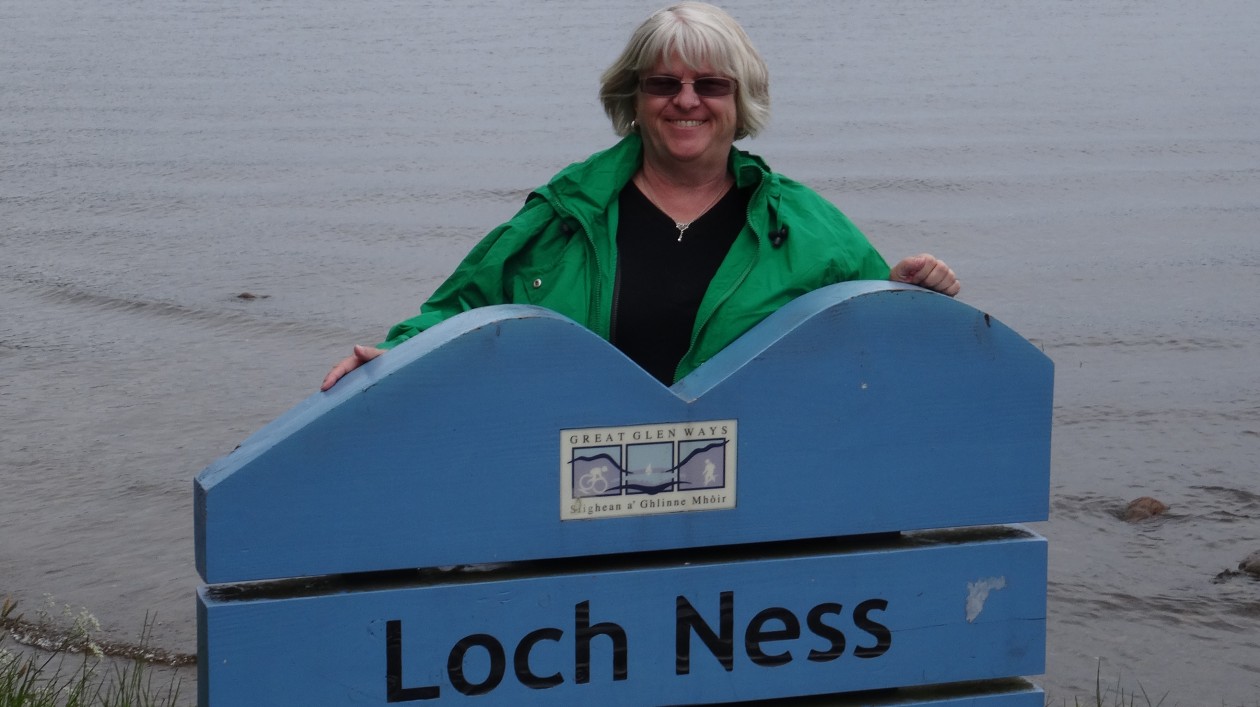 I was having breakfast at the Hilton in Olympia and decided it was time to make a plan for my remaining time in the Pacific NW. I didn’t want to spend it all in Seattle so where to next? Mount Ranier!

After getting back in my car I set Eatonville as my destination as that would get me on my way and should have good views of the Mountain. Further destination could be decided then.

First, though I took a short trip through downtown Olympia on this beautiful Sunday morning. I walked around Sylvester park and took in the Old Capital Building. 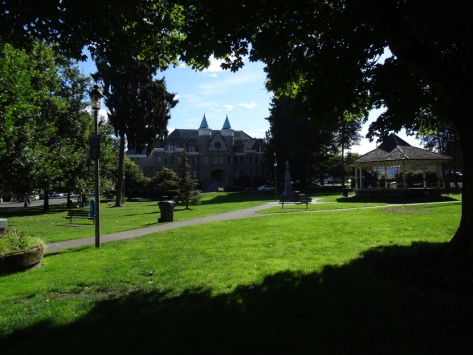 Another nice look at Americana. 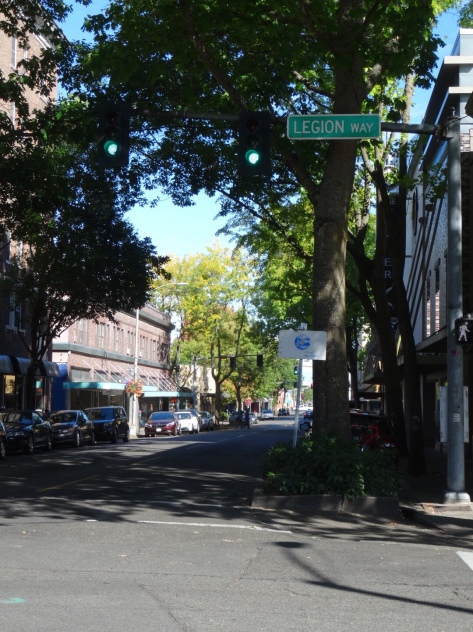 But then I was on the road. Having selected Eatonville that kept me on back roads. I do enjoy the scenery and the small communities that line these roadways. Shortly before getting to Eatonville I got to a great viewpoint of the mountain. Clearly Mount Ranier is a member of the Sisterhood (brotherhood) of Mountains since they have a sworn pact to remain cloaked with clouds as much as possible. This day, though, it looked more like icing that clouds. 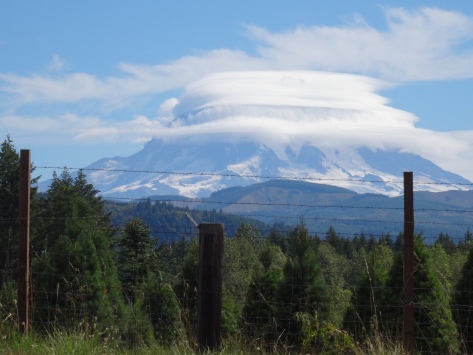 By this time, I had decided that there was no turning back – it was time to go all the way to the National Park and I was closest to the SouthWest entrance to the park. So that’s where I went.

Once in the Park, I was back into the beautiful woods of the Pacific NW. The roads were winding but well paved. My first stop was at Christine Falls. 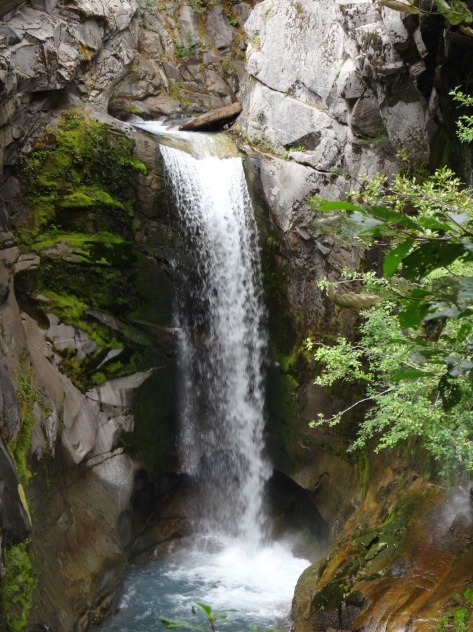 Not a huge waterfall, but still … who doesn’t love a waterfall.? I also liked the bridge that appears to have been built (or at least faced) with local rock. 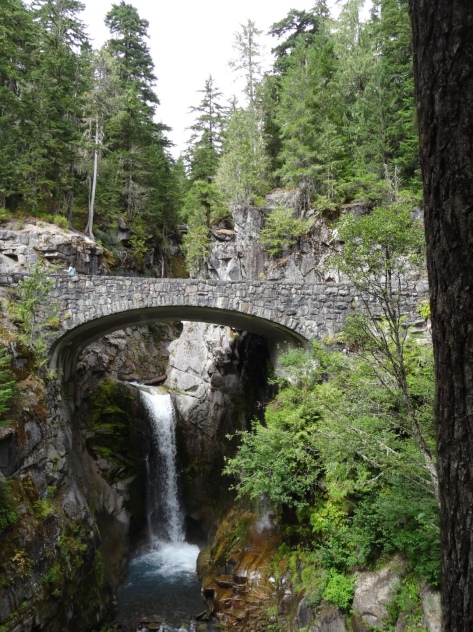 Once driving up the mountain it became difficult to get good pictures but bits and pieces to inspire. 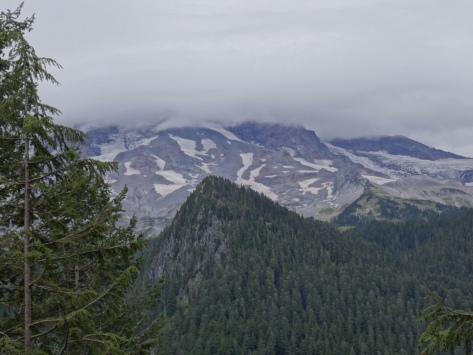 Eventually the road I was on ended up at Paradise where the famous Pardise Inn is located. It was beginning to mist with hints of rain so I just took a walk along one of the shorter trails. 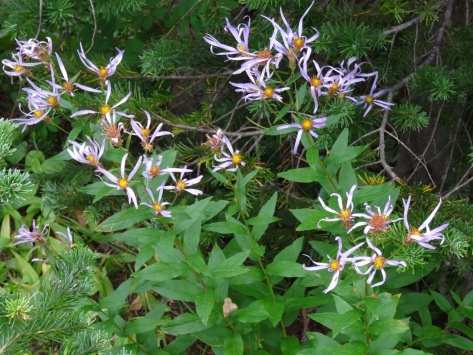 And of course Mountain View’s 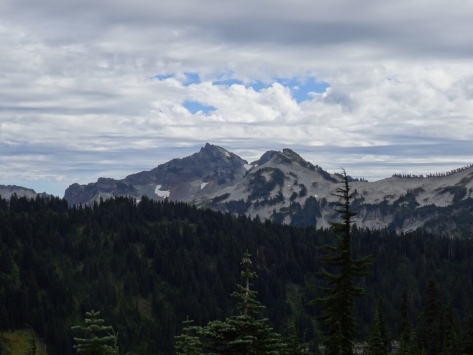 And of course, the wildlife. 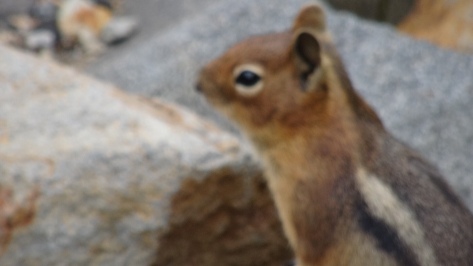 Yes I know I said I repel wildlife but this little guy insisted on playing tag with me while I walked, even to coming all the way up to my feet for a sniff before running off again.

It was a nice walk, and I enjoyed breathing it in. When it started to rain, I returned to my car and headed down the mountain. Of course it stopped raining almost immediately. The sun was peeping out periodically and I tried to get one more picture of the whole mountain once I was a bit always but I think my first pic was the best.

If you look carefully you can see one peak popping up through the clouds on the right.

It was a great day on the mountain. I headed on up towards Seattle stopping in the town of Auburn ready for a cold beer. I found an interesting brewery/restaurant called Geaux (pronounced go) which had New Orleans flair. Both beer and food were very good.